I often find it helpful to draw one card while asking the question – what should I be focusing on? This is especially helpful if you are considering the future, or having trouble making a decision.

So the card I drew was the Seven of Wands. I really, really don’t like this card. I seem to draw it a lot. Last year I spent quite a bit of time focusing on this card. In the RWS style decks (see Hanson Roberts and Nigel Jackson below) this card generally portrays someone defending themselves. My first reaction when I see the card is that I’m too defensive, or always needing to defend my actions. I’m sick of seeing this card and I have no idea how it can be the answer to my current dilemma, or how it can answer the question ‘what should I be focusing on?"

So, I decided to do a bit of a comparative study to see if I can work it out.

In the Alchemical Tarot, which I love, the image represents the negative side of competition. Ironically this is the only card in the Alchemical deck that I DON’T like. I like it even less that the RWS depiction. Moving on then….

Looking at the Thoth and Liber T, the theme seems to be about courage, valour, bravery, defending one’s convictions. I guess this makes a bit more sense to me. It’s certainly more positive than being defensive. I like the idea of standing up for what I believe in. And I actually like the Thoth version of the card, it's one of my favourites.

I kind of like this explanation. I’ve had a ‘challenging’ start to the year (and that’s putting it mildly) and so the idea of facing the challenges and disruptions with courage and valour makes sense to me.

Finally I got out some of my historical decks, firstly the Ancient Italian.

In the Classical Tarot, which is another version of the Ancient Italian, the keyword is ‘outcome’ which is interesting. I see the image in the Ancient Italian as also representing defending myself somehow, even though it only shows the seven batons. It is still six batons in front of the one single one standing at the back. I still get the feeling of the 'world is against me' type of thing. I guess to be more positive it could be about protection, or feeling secure.

But the real revelation for me was the Vacchetta (or Tarot of the Master) rendition of this card. 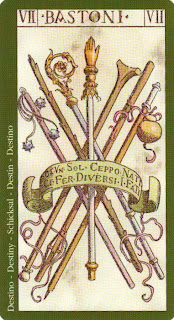 The keyword is ‘Destiny’. The card, titled ‘VII Bastoni’, shows seven different types of staffs. In front of them is a scroll which translates to "born from a single tree but with different destinies". How wonderful! To me, this seems like a far more positive way of depicting the idea of standing up for what we believe in. I guess this may at times mean we deal with conflict, and certainly at times I feel like the whole world is against me and often I even feel ‘attacked’ for standing up for my principles. But I guess this is my destiny. I need to remember that we are all here to do different things, and we are all very different. If I remember to just be true to my own nature then I can forget about being ‘defensive’ and just be me. I also love that in this card the single upright staff is in front of the others, not behind. It feel much more confident, like the courage depicted in the Thoth version has now paid off.

So, I should return to my original question….what should I be focusing on? This reading has reminded me that when I make decisions in life I need to consider what path will help me stay true to what I believe. If I stay true to myself, my ‘destiny’ as such, or my path, should become clear. Also, I guess that it's just a reminder that life's challenges are an opportunity for us to grow and become the people we are meant to be, and as a result come closer to fulfilling our destinies.
Posted by sapienza at 12:52 PM 4 comments: