I drew the Sun card from the gorgeous Tarot of the Thousand and One Nights this morning.  It was a fitting card because today where I am was an uncomfortably hot day.  The humidity was so high it was like I was swimming through the air.  All that could be done was to sit and wait and hope for a storm to cool things down. 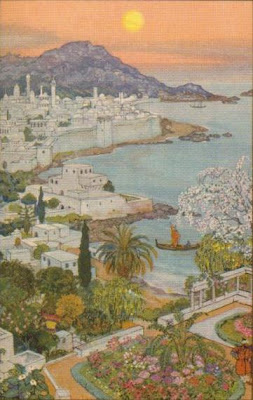 We never did get the storm, but as it now approaches dusk, the air begins to cool.  When I look at this card I get a sense of peace, calm and tranquility.  But, like the image above, it is the setting sun that provides some respite from the heat of the day.  During the peak of the sun one can simply be still and do nothing, it's just too hot to exert any effort at all.  Ironic that the sun can slow us down and the darkness can get things moving.  Life on this side of the world can indeed feel very upside down.
Posted by sapienza at 4:58 PM No comments:

on the Rosetta Tarot

I have recently had the opportunity to work with and review the wonderful Rosetta Tarot, created and self published by M.M. Meleen.  Also available is a companion book titled 'Book of Seshet - Guide to the Rosetta Tarot'.  I've included in this post some cards from the deck, a few excerpts of my review (which can be read in full here), and some additional comments.
Below are four of my favourite cards from the Major Arcana. 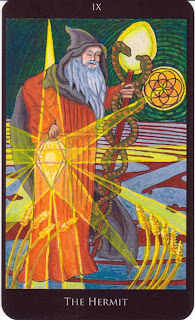 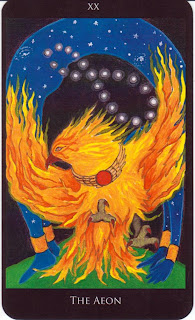 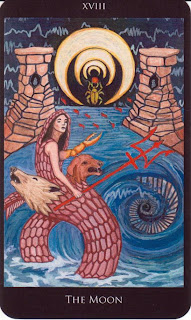 One of my favourite things about this deck is the vibrant colours of the artwork which really draw you in.  The creator has used a range of different artistic mediums to represent the essence of each of the suits. 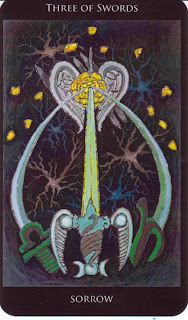 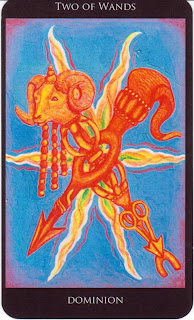 While the Rosetta Tarot is certainly a Thoth inspired deck the creator has based the designs on meanings in the Golden Dawn’s ‘Book T’ and so in some cases there is variation in the imagery from the Thoth deck.  This is not simply a re-drawn Thoth.  The creator has interpreted the symbolism in her own way, without obscuring the meanings.  While some cards have a very similar look to the Thoth deck, others are quite unique in the interpretation.
I love how in the Eight of Disks above the image looks very similar to the Thoth deck, but the owl has been added and the roots of the plant are formed in the shape of the glyph for Virgo.
In my opinion, the Thoth deck is a unique masterpiece.  The Thoth is based on a system with depth and substance to which you can devote a lifetime of study. It is a system which in the RWS has been somewhat obscured, and with the proliferation of prettied-up RWS clone or inspired decks has become all but lost in many cases.  The Thoth gives us the opportunity to actually work with the Golden Dawn system and understand what lies at the core of most modern tarots.  Over the years many people have expressed to me that, for some reason or another, the Thoth feels impenetrable and aloof.  I know for some it even strikes feelings of fear and for that reason some curious souls stay away.  I believe the Rosetta Tarot is a perfect way to access this system with a deck that perhaps feels a little more approachable.  The colouring is vibrant, and yet the imagery is softer than the Thoth.  The deck has a ‘home made’ feel without seeming amateur.  There is warmth that may be lacking in the Thoth.   I don’t believe the Thoth can be improved on or bettered at all, and I don’t believe that the creator of the Rosetta has tried to do this.  What the Rosetta offers is another path into this world, another way to begin the journey that all serious students of the tarot must surely take at some point. 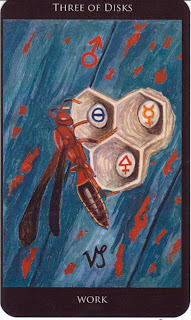 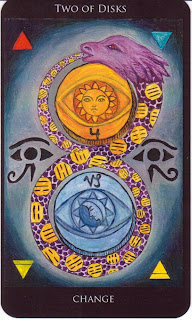 I always believe that when a deck is created by someone who passionately believes in what they are doing, and who pours their knowledge out through their artwork, the results are very special indeed.  This deck should not really be compared to the Thoth, it stands on its own merits and for those willing to spend the time, I’m confident it will deliver. 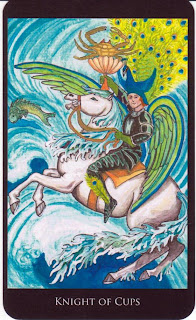 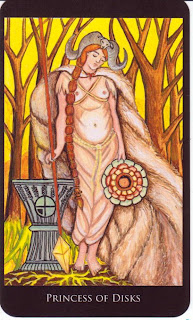 For further information you can visit the creators web-site here.
The creator is also involved in an on-line discussion, and possibly study group, at the Aeclectic tarot forum here.
Posted by sapienza at 3:50 PM No comments:

on getting to know the native fauna

For some time now I’ve been on the cusp of purchasing the Druid Animal Oracle.  My desire for a similar oracle using animals native to Australia has stopped me so far.  Unfortunately no such thing exists.   There is a long out of print set called the Wisdom of the Australian Animals Deck which was later re-worked into the Australian Animal Tarot Deck, also out of print.  Both were created by Ann Williams-Fitzgerald.  I have been fortunate enough to get a copy of the latter and have recently dug it out for another look. 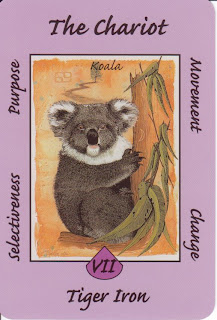 It is quite a beautiful deck, although I can’t imagine using it as a tarot deck, for me it has more potential as an oracle.  I have discovered that the companion book is impossible to find but was lucky enough to be able to purchase an e-book through the creator’s web-site.  I’m looking forward to spending some time with this deck and the accompanying e-book.  I love what has been done in the Druid Animal Oracle and would like to work with this set in the same way. 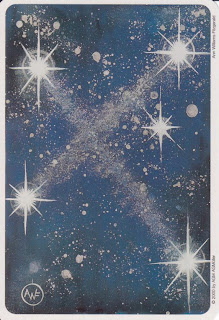 The cards are published by AGMuller and are a fairly standard size, albeit slightly wider than usual, and the cardstock is fabulous.  The artwork takes up a disappointingly small percentage of the card face and around the border are the title, keywords and a corresponding crystal.  The borders are two different shades of purple, or lavender, one for the majors and the other for the minors and courts.  The back is a gorgeous Southern Cross design which I absolutely love.
The artwork is by artist Tracy Hinschen and is quite stunning.  I have included some cards as examples.  While the usual ‘favourites’ are included there are also many less well known natives that I’m looking forward to learning more about.  There are quite a few non-natives as well such as the cat, camel and cattle dog. 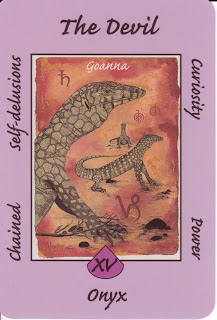 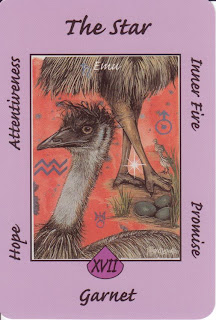 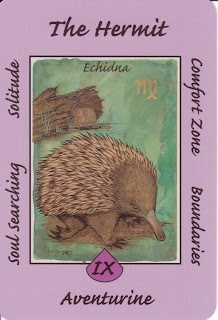 For those wanting to use the set as a tarot, the suit/element correspondences are rather unusual.  Wands are earth, Swords are fire, Pentacles are air and Cups are water.  In the e-book the explanation given for this is to allow for Southern Hemisphere influences but no further information is given to explain how that is so.  I can’t even begin to imagine how it could make sense and it is one of the reasons that I plan to use this set as an oracle and focus on the animals and their meanings, rather than any traditional tarot meanings.  In saying that, despite the changing of elements, the suit meanings appear to be quite standard to traditionally accepted meanings and I don’t think the new element is factored in much at all. 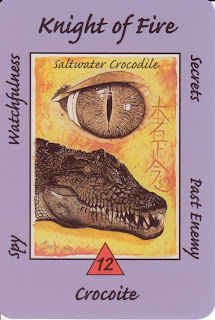 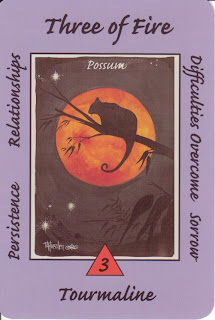 The e-book also provides a brief summary of the authors Auz Astrology system which allocates an Australian native animal to each month of the year, a little like the Chinese Zodiac system.  I’ve been working on something similar myself for the past year or so and was very interested to see many of my choices were the same as Ann’s.  In some of the cards you can see the Western Astrological Glyph that is associated with the particular animal as well. 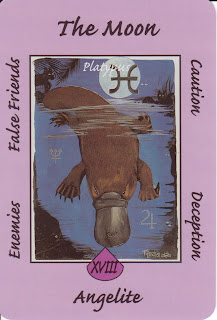 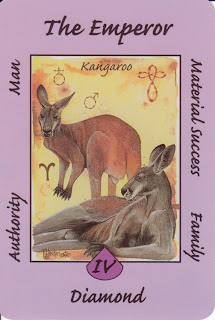 I think this set is a useful starting point for developing a good relationship with my native fauna.  It’s very easy living in the Southern Hemisphere to default to Northern Hemisphere systems and it certainly takes a lot more effort to break new ground on this side of the globe.  Between this and my Australian ‘Ogham’ project I should be kept quite busy in the year ahead.
Posted by sapienza at 8:02 PM No comments: