on working with Master Vacchetta

This week I thought I’d do a reading using the Vacchetta (Master) deck to see how it performed. When reading some blogs of fellow AT members I came across a great spread for discovering my highest potential. Thanks to RC and SherryZoned for bringing it to my attention.

The spread:
Shuffle the cards and ask "Where do my highest potentials and abilities lie? Cut them into four piles; physical, mental, emotional, spiritual. Search to see which pile has The Sun. That realm is where your highest potential lies. Shuffle just that pile and lay out three cards as follows:


I first went through the physical pile knowing the Sun wasn’t going to be there and I was right. I expected the Sun to be in the Mental pile and I was right again. I spend most my life running around in circles in my mind so this is certainly no surprise. Now, if only I can find a way to use my mental potential effectively…

The three cards I drew from the mental pile were:

The Hanged Man
Six of Cups
The Moon


1. What aids me in developing my highest potential? The Hanged Man 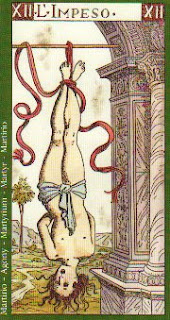 So I read this to mean that it is my challenges and trials in life that help me to develop my potential. The sacrifices I have made and the difficulties I have had in my life obviously contribute to who I am today. Also I think that it could be about my ability to look at things from different perspectives. The keyword on this card is ‘agony’ which says to me that it’s the most difficult stuff that contributes to my potential. I wonder if it’s also a reminder that I need to be patient. As far as the mental side of things go I tend to be very ‘full-on’ with things. If I have a new idea I have to fully research it immediately, I can’t just take my time. I go through life thinking ‘there is so much information, and so much to learn, and yet so little time’. Maybe I just need to take it easy.


2. What hinders me in developing my highest potential? Six of Cups 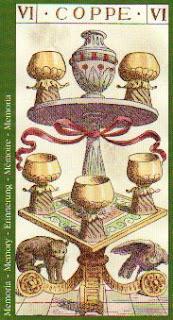 This is an interesting Six of Cups. I spent some time on the weekend looking at this card and working out how the keyword ‘memory’ fitted with the image. I read this card as being very much about past-present-future and how the three link together. I see the card in three levels with the two animals at the bottom being the past (cat representing the actual past and bird representing the perceived past, which are often two very different things), the middle layer with the three cups being the present and the top layer with the two smaller cups and the larger more elaborate cup, being the future. It’s interesting how the middle level seems to be dragged down towards the base (the past). I read this card to mean that if we want to move towards our future, our aspirations and our dreams, then we need to release our tie to the past, especially things in the past which cause us pain. That’s not to say we sever all ties with the past, but we need to reconcile our issues and then let the issues go, let the pain go. I think often our ideas and goals seem fanciful and unrealistic because we are still carrying limiting beliefs formed in our past. So, the message for me….let stuff go. Accept that painful incidents in my past have helped me become the person I am, and that they have served me well, but it is also time to let them go so I can focus on the future and achieve my potential.


3. A possible outcome once you have formed and developed your highest potential. The Moon 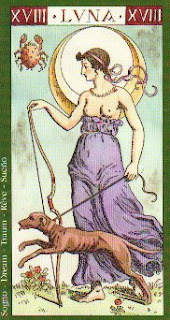 This seems quite a strange card to have in this position. It’s probably my favourite card in the deck, and possibly my favourite ever moon card. I guess the moon can mean quite a few things. It can indicate confusion and so perhaps the message for me is that now is not the right time to be trying to have a concrete outcome in mind. Perhaps I just need to ‘go with the flow’ and see where I end up. It could also indicate that the outcome would involve using my intuition. Another thing I think of in relation to the Moon is motherhood. My highest potential could be linked to my role as a mother and so perhaps I should be concentrating on being a good mother to my girls rather than worrying too much about the future. The Moon can also symbolise dreams and so it could suggest that I need to focus on my dreams and work towards making them a reality. Cycles are another thing represented by the moon, and mystery and magic. No wonder I feel confused. 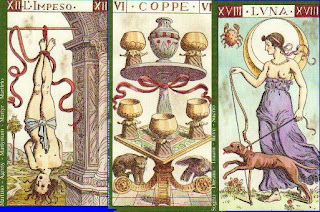 After looking at the three cards for awhile it suddenly struck me that the Hanged Man has his head down the bottom (obviously) which links to the past in the Six of Cups, and the Moon has her head up the top, linking to the future in the Six of Cups. Perhaps this is the message for me….to stop hanging around in my thoughts of the past and looking for reasons as to why things are the way they are, and to simply flow with life and live in the present with a view to the future and the realisation of my dreams.
Now I just need to work out exactly what those dreams are.
Posted by sapienza at 12:50 PM No comments:

on meeting the master

Inspired by my reading earlier this week I’ve been working quite a bit with the Tarot of the Master. The Seven of Batons struck such a chord with me and I’m feeling more and more drawn to working with this deck. For those who are not familiar with the deck, it was created and published in Turin in 1893 and originally called ‘I Naibi di Giovanni Vacchetta’. The edition I have has been republished and coloured by Lo Scarabeo in 2002. The original was black and white. Because Giovanni Vacchetta was known as the "Master of Design’ at Albertina Academy in Turin, the deck has been titled ‘Tarot of the Master’. I’ve always been attracted to some of the historical decks, in particular the delightful Ancient Italian tarot, but have struggled with the non-scenic pips. What I love about the Vacchetta deck is that the pips are illustrated, not in the modern RWS style, but they are quite elaborate compared to some of the other historical decks, and provide enough symbolism for me to really connect with the images. It’s quite different to any deck I’ve worked with in the past….and that is just what I need right now.

I thought I’d have a little bit of a ‘chat’ with the Master and see if the two of us should work together for awhile. 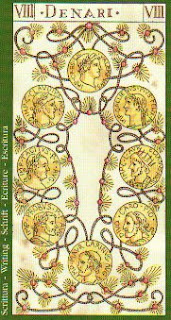 So, what do you have to offer as a deck Master Vacchetta? Eight of Coins (Denari). This tells me that the deck will be great for helping me to make connections between things. The keyword is ‘writing’ but I see this card overall as being able to bring together information from different sources in order to make sense of things. It’s as if the thread connecting the coins is alive with energy and excitement. I feel really excited when I see this card. So perhaps Master Vacchetta can offer me an exciting way to deepen my knowledge of tarot. 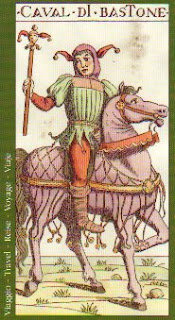 What can you help me to learn about tarot? Caval di Bastone (Knight of Batons). The keyword on this card is ‘travel’ and so immediately I get the sense that I can learn that tarot is a learning journey. This deck may help me to accept that it’s not about the destination but rather the journey, that I’ll never ‘master’ the tarot, rather I’ll be a student for life. Also, given that the knight is dressed as a jester I think it could be a reminder to have fun with the tarot, not to take it all too seriously and make it all academic. Perhaps this deck can help me to have more fun with tarot. 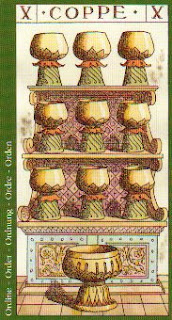 How should I approach using this deck? Ten of Cups. This is an interesting rendition of the Ten of Cups. My first thought is that the Master may be a little possessive of me. I get the suggestion from this image that he would like me to put all my other decks away on the shelf and use him alone. What I think he’s saying is that he is, after all, the cup with the most to offer. Why would I need any other decks? The keyword on this card is ‘order’, which also says to me that I need to actually work with this deck and systematically go through the cards and focus on all the details, rather than just skimming the surface. I feel like there are definitely treasures to be discovered in these cards. 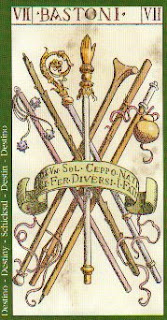 Should I use this deck when reading for others? Seven Bastoni. Here is the card that inspired me to be having this ‘conversation’ with the Master. So, is it my destiny to be using this deck to read for others? I get a sense that working with this deck will help me to give readings that are more in line with what I believe tarot to be about and in some ways, to be more true to myself. I also think it could be saying that my readings for others with this deck can help them to realise their own destinies….which kind of fits in with some ideas I was having…..how very interesting! 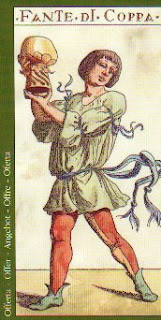 Not to be negative, but what are your limitations as a deck? Fante di Coppa (Page of Cups). You’ll just tell me whatever I want to hear. A bit of a romantic hey? You just want life to be beautiful and happy and filled with love…….well, I think I can live with that. 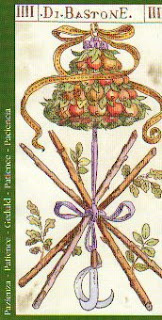 Finally, can you give me a card that will sum up our relationship of working together? Four of Batons. Well, it looks like it’s going to be very fruitful. We’ll have a secure base and then from that we can grow. The keyword is ‘patience’ so I guess that’s a good reminder that I’ll need to be patient with you as we begin working together……and you’ll need to be patient with me as well. 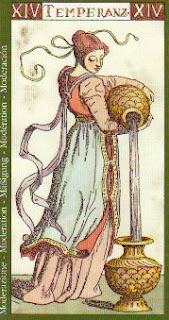 Any last thoughts….? Temperance. Wow, this is just about my favourite card in this deck. The keyword is ‘moderation’ which reminds me to take it easy and not overdo things. Sometimes when I discover a new deck I work with it so much I end up feeling sick of it. This card is a good reminder that although I’ll use this deck for my PDR’s and even for readings, I need to not overdo things and keep using my other decks as well. I love the way that the figure on this card looks back over her shoulder at the water. It says to me that while it’s fine to reflect on things and look within, you still have to make sure that the day to day stuff of life is getting done too….like feeding the kids and cleaning the house. The key I expect is in finding a balance between both.

OK, so I’m very excited. I’ve also discovered a colour-in version of this deck which will be a great way to spend time with the cards and really discover all the details. So, from now on I’ll be working primarily with ‘The Master’ but still using my other decks as well. I’m certainly looking forward to the journey.
Posted by sapienza at 4:30 PM 3 comments: