Some time ago I posted about a new deck created by M. M. Meleen called the Rosetta Tarot.  You can see the post here and read my full review at Aeclectic Tarot here.  Since writing in December this deck has taken out number one spot on the Aeclectic Tarot 'Most Popular Deck Published in 2011' poll.  Congratulations for this well deserved accolade must go to the creator.  Below I've included two of my favourite cards from the Rosetta Tarot. 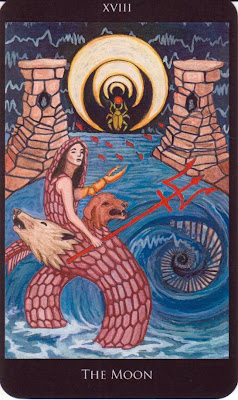 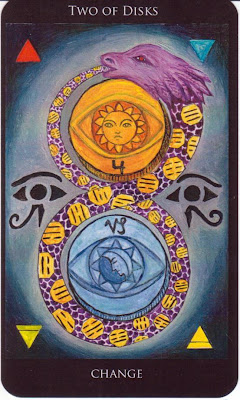 The great news is that a new deck is currently underway and what I have seen so far is very exciting.  You can follow Ms Meleen's progress at the Rosetta Tarot website.  She also has a blog where you can follow the progress of the deck and see images as they are created.  There are also discussions of how the art is created. 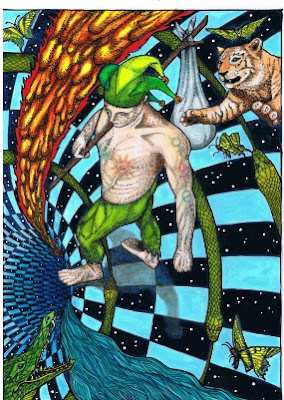 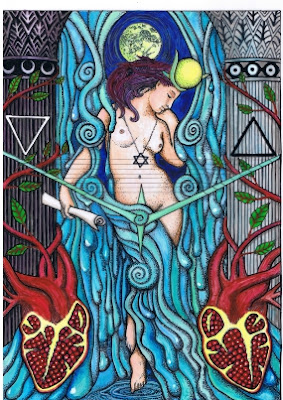 I'm looking forward to the unique opportunity to follow this deck as it unfolds. I'm loving what I have seen so far, especially the Fool and Priestess as above.
Posted by sapienza at 12:24 PM 1 comment:

on food and tarot

I have to be honest and say that I'm spending a lot less time with tarot these days than I used to as I've been somewhat preoccupied with other things.  I have rekindled an old passion for cooking which has come as rather a surprise to me.  I thought about starting a family cookbook but my daughter encouraged me to start a food blog instead.  The result is called tao belly for those of you who may be interested.

Inspired by food I thought I'd take a look at food imagery in tarot.  So far I've come up with the following but I may add to it as I find more. 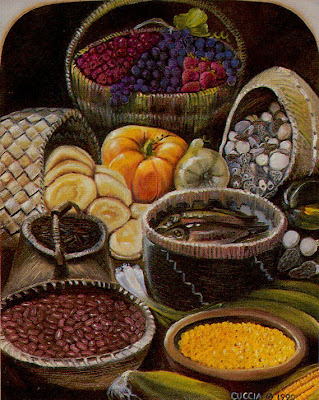 The Seven of Disks from the Ancestral Path Tarot was the first to come to mind.  I love this card and the imagery really does inspire one to cook using wonderful fresh produce. 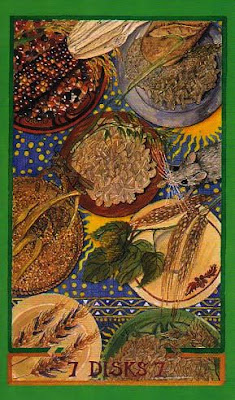 The Wheel of Change Tarot, which unfortunately I don't own a copy of has similar imagery on its Seven of Disks as well. 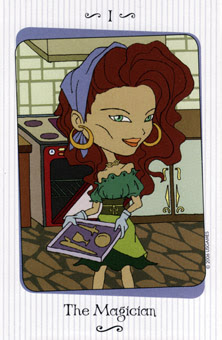 I'm definitely not a 'baker' as such but the Magician from the Vanessa Tarot is rather cute. 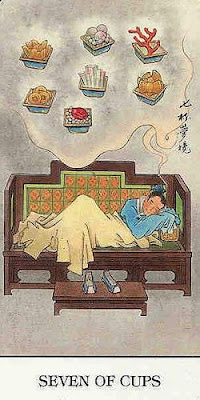 The Seven of Cups from the Chinese Tarot is another one I like.  Just imagining all the wonderful types of food possibilities starts to make your mouth water. 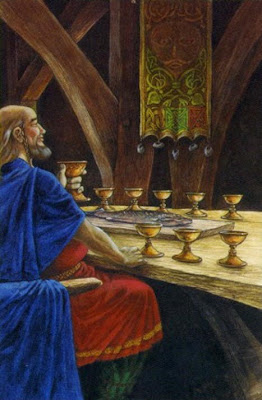 The Nine of Cups from the Druidcraft Tarot shows a man sitting down to a feast of salmon, alone it would seem, or perhaps he is waiting for his guests to arrive.  Let's hope the fish doesn't get cold. 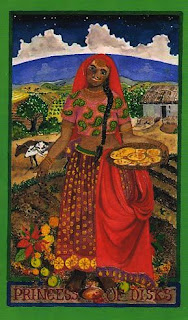 The Wheel of Change Princess of Disks is a reminder of where our food comes from. 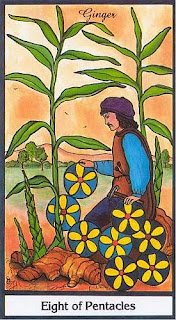 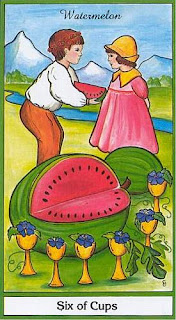 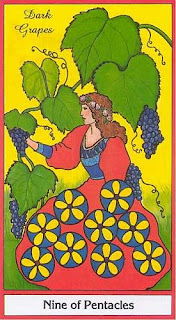 The Herbal Tarot shows herbs on all its cards.  Here the Eight of Pentacles shows ginger, a favourite of mine.
Posted by sapienza at 9:10 AM 2 comments:

Autumn is my favourite time of the year.  Even though where I live we don't really have the 'typical' autumn, I still love the sense of winding down that this time of year brings.  Because most of our trees are evergreen it is always exciting to try and spot the trees that do begin to turn orange and lose their leaves.  It's still very hot with daytime temperatures still peaking around 30 degrees.  And yet, when I wake in the morning there is that slight chill in the air that lets me know that cooler days and nights are coming.


This card is from the Arthurian Tarot deck created by John and Caitlin Matthews and illustrated by Miranda Gray.  To me is captures the essence of autumn. 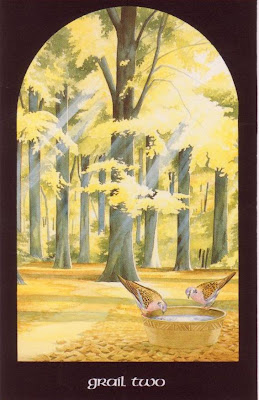 Posted by sapienza at 4:17 PM No comments:

on full moons and sleepless nights

Tonight is a full moon and I find myself unable to sleep.  I am always in awe of the power the moon seems to have over us and it is on the full moon that I notice this most accutely.  Lying in bed seemed futile and so I thought a little parade of moon cards might help me nod off. 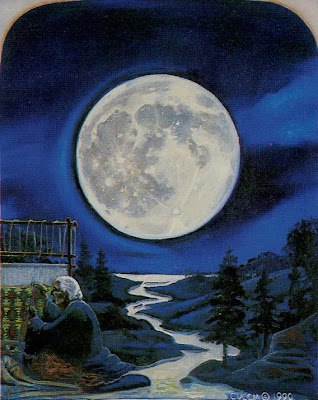 The card above is from the Ancestral Path deck and I absolutely love the imagery.  This is how the moon feels to me tonight, a reminder of how small and insignificant the twists and turns of our own lives are in comparison to the cycles of this glowing orb. 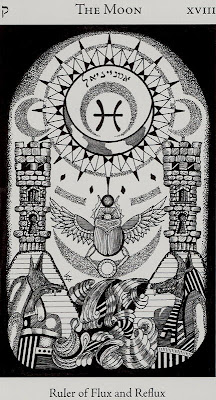 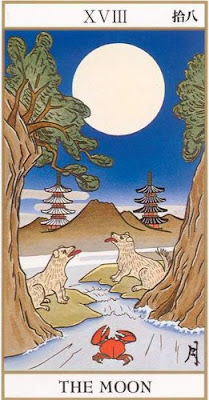 Above are cards from the Hermetic and Ukiyoe decks. 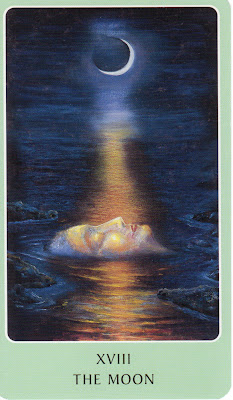 While not a full moon, the Roots of Asia Tarot is a beautiful image. 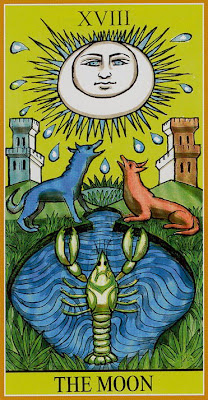 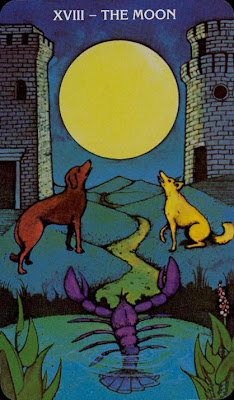 Dame Fortune's Wheel Tarot shows the moon in a style that reminds me of stained glass.  The Morgan Greer card also seems to have the same luminous quality. 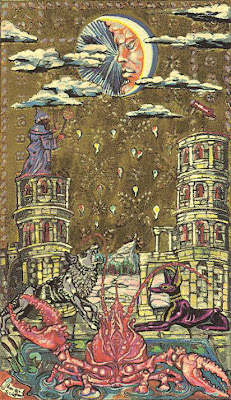 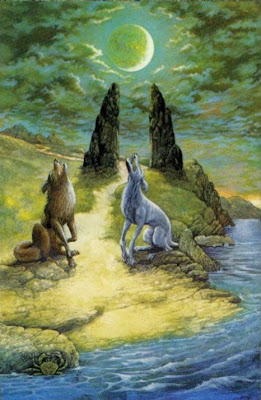 Both the Dotti and Druidcraft decks show the dogs howling at the Moon. 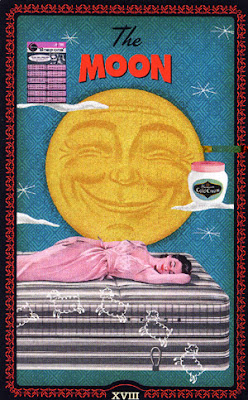 Finally, the Moon from the Housewives tarot which I included in my post about counting sheep, provides a depiction of what I'm aiming for myself.....finally drifting off to sleep while the full moon smiles down from above.
Posted by sapienza at 11:47 PM No comments:

on alchemy and the tarot

For those of you who, like me, are big fans of Robert Place's Alchemical Tarot, you may be excited to know that he has now released a new version of the companion book for this deck.  I am lucky enough to have the original edition of the deck that came with the companion book, but for others who have purchased the Alechmial Renewed deck this new release has been long awaited.  There is also a third edition of the Alchemical Renewed deck available as well.

You can find details at Robert Place's website here.


For those not familiar with the Alchemical deck here are a few images to whet your appetite. 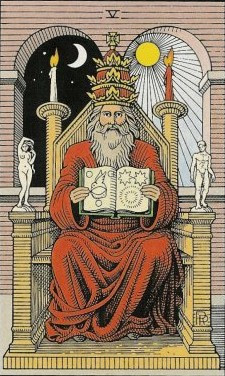 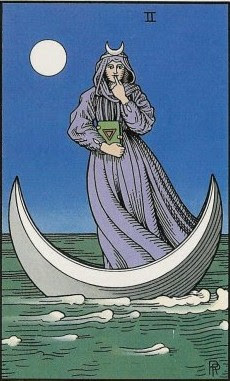 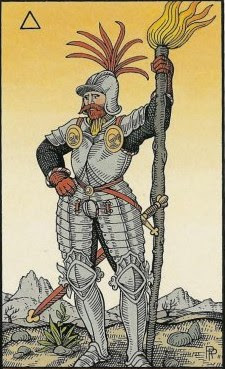 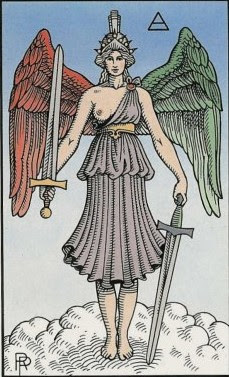 Knight of Staffs and Queen of Swords 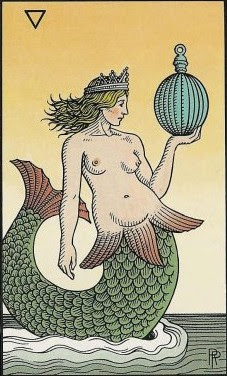 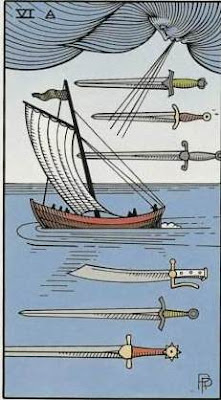 Queen of Cups and Six of Swords
Posted by sapienza at 4:04 PM No comments: